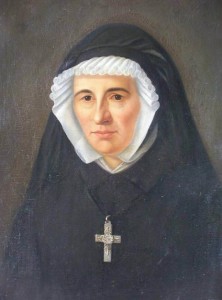 Claudine Thevenet was born in Lyon, France on 30th March, 1774. After a traumatic experience of the execution of her two brothers and the French Revolution, she realized the urgent need to re-discover the existence of a good God who loves humanity unconditionally. “Forgive as we forgive”, is the legacy that her two brothers left Claudine before dying. This moment marks a decisive turning point in her life. She was then 19 years old. The words of her brothers left her with deep anguish to seek what best could be done to experience the goodness of God. So, Claudine, together with other young women, began a clandestine apostolate, to relieve the suffering, show charity those left downtrodden, to bring God into their lives, to know and love Him, even before the war ended.

The driving force of her life was the love of God. Claudine dedicated her energy, time and entire life for children and young people who were left ignorant of God.  One day at the entrance of the Church of Saint Nizier, she accepted two little girls who were abandoned.

At this moment, with the collaboration of her young companions, the first Providence was established and named the Providence of the Sacred Heart; this was at the end of 1815. To form themselves as one body, give stability and continuity for the work at the Providence, Claudine and her seven companions formed an Association of Sacred Heart of Jesus on 31st July 1816. Fr. Andre Coindre was their spiritual director.  On the night between the 5th and 6th of October 1818, Claudine left her old mother, to live in a humble house, with hardly any furniture,  a worker, an orphan and a loom for weaving silk. Claudine was hardly aware that she had founded a Congregation of the Religious of Jesus and Mary. Later she would remark that “It seemed to me that I had launched upon a foolish enterprise without any guarantee of success”.

Claudine’s principal objective was education, with a clear preference for the young and among them the most unfortunate. Her pedagogy was based on love, goodness, preventive, attention to each person, and marked with a family spirit.

Claudine lived the experience of God, and she surrendered herself totally to Him. Her last words “How Good God is” indicates the character of this great woman who allowed the Holy Spirit to guide her. Having accomplished her mission on this earth, Claudine entered her heavenly abode on a Friday at 3 o’clock in the afternoon of February 3, 1837, at Fourviere, in France.

Saint Claudine Thevenet was beatified on October 4, 1981 and canonized on March 21, 1993. Both these ceremonies were presided over by Pope John Paul II at Saint Peter’s Square, Vatican City.